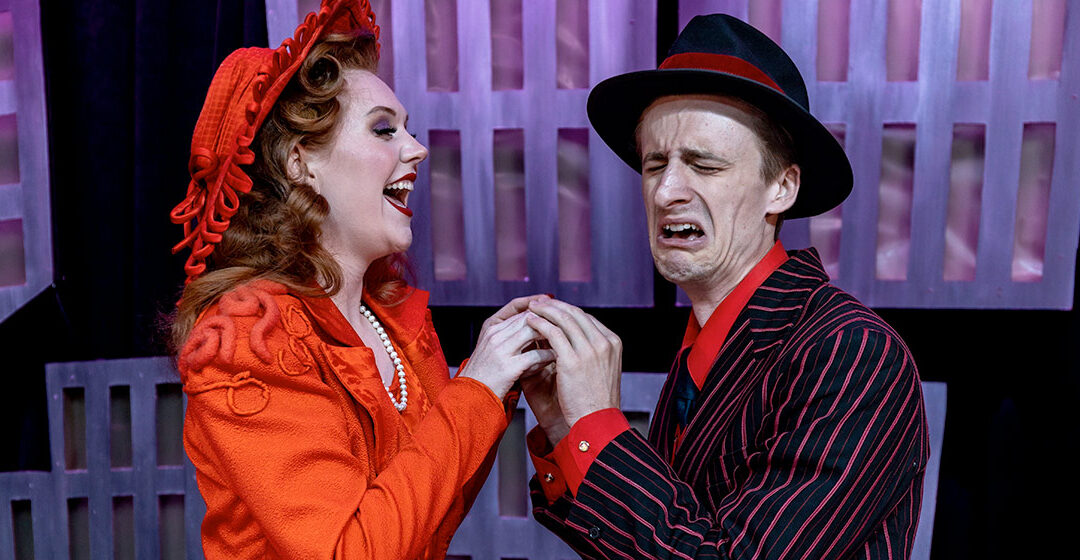 Thingamajig Theatre Company opened the second musical of its repertory season with Guys and Dolls on Friday, June 17, at the Pagosa Springs Center fort the Arts.

The show will run in repertory with two other Broadway hits, Bright Star and The Spongebob Musical, through August 24.

Based on short stories by Damon Runyon and set in 1920s New York City, the Tony Award-winning musical was written by Abe Burrows and Jo Swerling. Frank Loesser composed the toe-tapping music and wrote the lyrics for the many familiar songs, including the hilarious “Adelaide’s Lament,” the romantic “I’ve Never Been in Love Before,” the exuberant “If I Were a Bell,” and the classic “Luck Be a Lady.”

In addition to the gambling underworld of horse racing and craps games, the romantic comedy also bets on love.

Guys and Dolls involves the unlikeliest of Manhattan pairings: a high-rolling gambler and a puritanical missionary, a showgirl dreaming of the straight-and-narrow and a crap game manager who is anything but. Guys and Dolls tells of con-man Nathan Detroit’s efforts to find new life for his illegal, but notorious, crap game. When their trusty venue is found out by the police, Nathan has to find a new home for his crap game quickly – but he doesn’t have the dough to secure the one location he finds. Enter Sky Masterson, a high-rolling gambler willing to take on any honest bet with a high enough reward attached. Nathan bets Sky that he can’t take the “doll” of Nathan’s choosing to Havana, Cuba, with him on a date. When Sky agrees to the bet, Nathan chooses Sergeant Sarah Brown, head of Broadway’s Save-a-Soul Mission. Sky thinks he’s been duped, but he’s in for even more of a surprise when his efforts to woo Sarah are so successful that he falls in love with her himself. Guys and Dolls takes us from the bustle of Times Square… to the dance clubs of Havana… to the sewers of New York City… as it demonstrates the great lengths a guy will go to… when he truly falls in love with a “doll.”

If you have already purchased season tickets please be sure to secure your seats for the performance you plan to attend. Call the Box Office at 970-731-SHOW (7469) to reserve your seats.