‘Ring of Fire’ Playing Through September 15 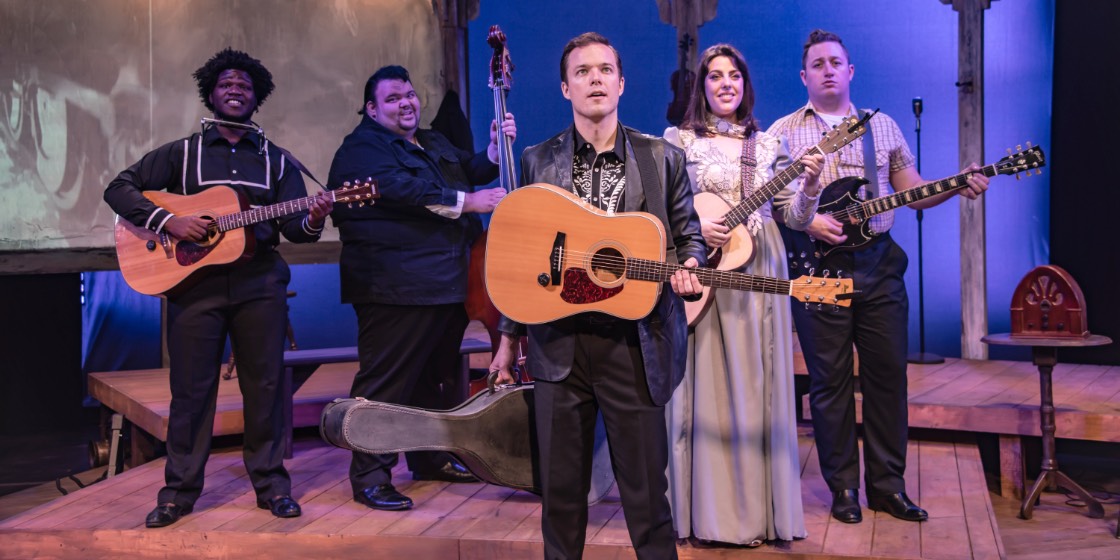 Thingamajig Theatre Company’s 2019 ‘Broadway in the Mountains’ Summer Season hosted the final performances for three of its main stage musical productions over the Labor Day weekend at the Pagosa Springs Center for the Arts — but Artistic Director Tim Moore made the decision this year to run one the outstanding summer season productions into Pagosa’s ‘shoulder season.’

Thingamajig’s “Ring of Fire’ will continue playing through Sunday, September 15, with performances offered Thursday through Sunday each week.

A set of gifted singers and instrumentalists sing through some of the greatest songs of one of America’s most brilliant singer/songwriters, Johnny Cash. Though he is never impersonated in the show, his remarkable life story is told through his music, climaxing in a concert that will both move and exhilarate…

“Ring of Fire” celebrates the music of one of America’s most popular singer songwriters, Johnny Cash. The show does not, however, attempt to portray The Man in Black directly. Instead, the contours of Cash’s life and art can be seen through narratives woven by his music. The story — told through Cash’s music — develops an earnest dialogue about home and family, the people you love, and what holds people together in the face of tough times. The group of five singers, actors, and musicians that make up the “Ring of Fire” cast are multi-talented artists from around the country. Thingamajig audiences might spot a favorite from the years past: Steven Sitzman, who appeared in such Thingamajig productions as “Sister Act,” “Big River” and “West Side Story”. The other four performers are new this year to the Thingamajig stage: Rayshaughn Armant, Allie Tamburello, Nick Abbott, and Tommy Paduano.

This talented group of artists will be singing and playing a variety of instruments to bring Cash’s musical legacy to life right before your eyes.

Johnny Cash was born February 26, 1932 in Kingsland, Arkansas, the fourth of seven children. He gr ew up with music as an integral part of his household, and began to write songs and play guitar at age twelve. After his graduation from high school in 1950, he enlisted in the US Air Force, serving with the Air Force Security Service in Landsberg, Germany, where he organized his first band, the Landsberg Barbarians. Following his discharge from the Air Force in 1954, he auditioned for Sam Phillips’ Sun Records and with a couple of mechanics, Marshall Grant and Luther Perkins, formed a trio known as Johnny Cash and the Tennessee Two. The three friends recorded hit songs such as “Cry, Cry, Cry” and “Folsom Prison Blues”.

Throughout the late the 1950s and into the 1960s, Cash continued to produce hit records. His songs “Don’t Take Your Guns to Town,” “I Got Stripes,” “Understand Your Man,” and “The Ballad of Ira Hayes” all hit near the top of the record charts. Cash also produced arguably his most popular song, “Ring of Fire” at this time.

Despite Cash’s success on the charts, he struggled throughout his career with drug and alcohol abuse. Following his divorce from Vivian Liberto in 1967, he moved to Nashville in 1967 and worked with June Carter, who helped Cash overcome his drug addiction. The two went on to marry in 1968 — and produced top charting duets, including “Jackson,” “Long-Legged Guitar Pickin’ Man,” and “It Ain’t Me, Babe”.

In 1980, at the age of 48, Johnny Cash became one of the youngest inductees into the Country Music Hall of Fame. The Rock and Roll Hall of Fame inducted Cash in 1992, as one the few musicians recognized in both organizations. Although he suffered from complications from diabetes, Cash continued to write and record, earning a Grammy for best contemporary folk album — American Recordings — in 1994, another Grammy for best country album — Unchained — in 1997, and a Grammy for the best male country vocal performance for his cover of Neil Diamond’s “Solitary Man” in 2000. In 2003, Cash earned three CMA awards, and his video for Hurt won an MTV award and a Grammy.

Johnny Cash lost his wife June Carter Cash to heart failure in May 2003. He passed away a few months later, on September 12, 2003.

Cash’s rugged simplicity and honesty in his work extended the scope of country music and broadened audiences throughout his career. “Ring of Fire” soars through his iconic music and will leave you humming “I’ve Been Everywhere” and “I Walk the Line” for days to come. You’ll laugh along with “A Boy Named Sue” and struggle to not sing along with “Folsom Prison Blues”.

This music-lover’s musical is directed by veteran artist Christopher Willard, whom some Thingamajig fans may remember from ‘Fully Committed’ — the very first production ever performed on the Pagosa Center stage. Willard leads a talented crew of designers: Thingamajig costumer designer Nanette Cheffers (“A Christmas Carol” and “Legally Blonde, The Musical”); resident set designer and technical director for Thingamajig, Matthew D. McCarren, who has created yet another beautiful set design; and Laine Wong, long-time lighting designer, back for another season dramatically illuminating the stage.

“Ring of Fire” runs in repertory with the rest of Thingamajig’s “Broadway in the Mountains” summer season, through September 15 at the Pagosa Springs Center for the Arts.

“Ring of Fire” will take place in the Pagosa Springs Center for the Art’s Black Box Theatre located in the back of our theatre.